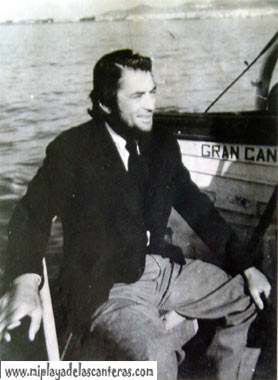 This amusing, uncensored account of the filming of Moby Dick comes from the well-known boxer, Carreta, who at the age of 89 still has an impeccable memory. Some of the scenes from the film were shot in Las Canteras bay.

“The news that a film was going to be shot at La Puntilla spread like wildfire among the people of La Isleta. And the production was going to feature the famous actor, Gregory Peck; just imagine how everyone reacted!

Life was pretty difficult in those days and the townspeople awaited this new attraction with great anticipation. The hope of making a chunk of change by being involved in some part of the production was on the minds of everyone.

I still remember the big parties that Gregory Peck and the film crew had in the “Juan Pérez” restaurant. They would eat and drink to their heart’s content and always left feeling very happy.

Coincidently, two acquaintances of mine, “El Grandote” and “El Chucho”, who were also well-known in La Isleta at that time, were given the job of buying the bait that was supposed to be used to lure the seagulls to the film location. They sailed their raft from La Puntilla to the area surrounding El Confital and began luring the seagulls to create a suitable set for the demanding director. The bait, high-quality meat, was something that the poor families in the area could not afford. The meat was actually shared amongst family and friends and the poor seagulls were given scraps of fish.

Translation: Students from the Faculty of Translation and Interpreting, University of Las Palmas de Gran Canaria.

A story about the filming of Moby Dick, from Carreta