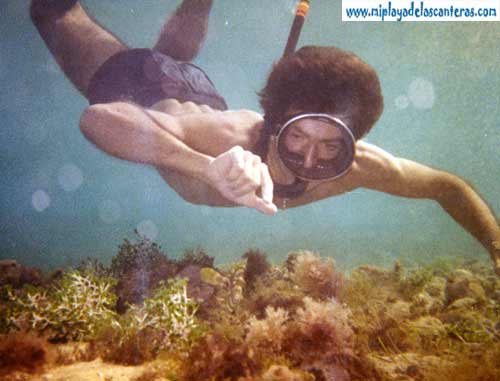 (Photo: Seahorse swimming through the sea-grass beds at the La Barra)

It’s been two years now since Pepillo, a fisherman from San Cristobal, caught a couple of seahorses in his net and placed them in a hole in the volcanic reef known as La Barra. Pepillo, who is an ardent beach and nature lover, brought these two specimens there in an attempt to reintroduce them to Las Canteras beach.

Seahorses, which are fragile, nearly mythical creatures, became extinct near our beach along with pipefish and green shrimp because their habitat was buried by the sand that had accumulated between the volcanic reef and the shore, leading to the elimination of the sea-grass beds. When the posidonia oceanica and the caulerpa taxifolia, two different kinds of seaweed, disappeared, seahorses couldn’t survive as they could no longer feed on the shrimp nor did they have a place to shelter or breed.

But Pepillo hasn’t lost hope of seeing them in the waters of Las Canteras once again; and he will try again and again until he finally succeeds. He will wait until the other fishermen from San Cristobal tell him of a new capture and he will then bring the seahorses to the beach and try to breed them. His ultimate dream is to observe them swimming through the green sea-grass meadows while diving. However, as he says, ‘many tons of sand still need to be removed from the beach in order to allow for this to happen’.

Memories of a Boat: the Sensat