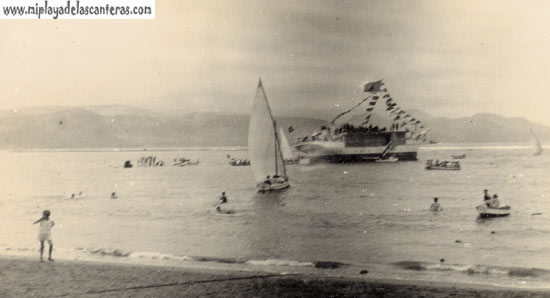 I have some memories of the Sensat, because I was born in 1919 and when the boat anchored, at the end of the ‘20s and the beginning of the ‘30s, I was 9 or 10 years old. It was said that the ship was a company, but I do not know if it belonged to a company or just to four friends who bought it together. I remember that very well-dressed men went to the ship. They wore white socks and sport shoes, but not these beautiful sport shoes that are in fashion now. The women wore pleated skirts. They went there to swim and spend time, since there was a restaurant or a café on the boat. I always recall the Jantzen swimsuits. I think they were unisex, because they were identical for both man and woman, with the bib at the top. I remember when children like me swam and the bottom of the sea was covered with a huge mass of seaweeds. We were always lying in wait for the guard standing there, who looked so nice in a sailor suit. When he moved to one side, we got onto the boat and ran. Then he ran after us and we jumped into the water. He was always standing there, ready to take a little boat to the small dock on the seashore, and to pick up people who were going to the Sensat. 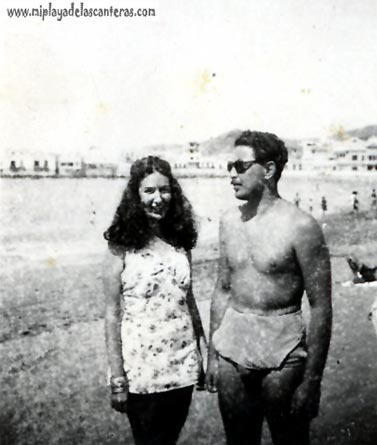 I think there was a restaurant or a bar on the boat because there were people sitting there with umbrellas and everything. I do not remember if they were sunbathing on the deck as I was only 9 or 10 years old. Nor do I remember the boat being swept away from the shore by a storm. I only remember a big boat aground on the beach and the small dock. Well, I do not know what engineer had the brilliant idea of building a dock on the sand, because when it gets wet, the wood ends up splitting. Anyway, there was a dock right there, with a tiny gallery, a handrail and a jetty. It was 20 metres beyond the small Galán beach hut. I don’t know why people call it a “small beach hut”, since it was a big house; but, you know, we always referred to the things with their diminutive here. I do not have any idea to whom it belonged, and nobody knows whether it burned down by accident or due to arson in December 1935. The curious thing is that it was built upon wooden piles and the floor was also made of wood. People who went to the beach could keep their clothes there. You could get a delicious meal there — even paella. We crawled under the hut to watch women when they came into, as there were some cracks in the floor. We always found copper coins and 5 or 10-cent coins. It was a gold mine, because people took their trousers off and, of course, everything fell down in the sand since the hut was made of wood. I also remember a big water receptacle in the entrance with a poor turtle inside, which burned along with the hut.

Returning to what I was saying about the Sensat, I cannot say whether those guys were tourists or if they came from here. Maybe they were from rich families from here who spent time there. I have no idea. I do know that they arrived there, wearing white clothing and straw hats. It looked as if they were going to play tennis.

I remember them going for a walk by the seaside when the tide was low; they were dressed as if they were going to mass. They walked from La Puntilla up to Muro Marrero, because you could not go through at high tide, only low tide. Even nowadays, you cannot go through at high tide. The Playa Chica was a promontory where there was a large, pretty house that belonged to Saturnino Báez, a doctor who prescribed natural remedies.

No matter whether it was summer or winter, my mother took us to the beach when the weather was good and she sat down in a wicker armchair in the little Galán beach hut. I grew up always connected to Las Canteras beach, from the small Galán beach hut to La Puntilla, where some craftsmen made the fishing ropes and nets.

Translation: Students from the Faculty of Translation and Interpreting, University of Las Palmas de Gran Canaria.