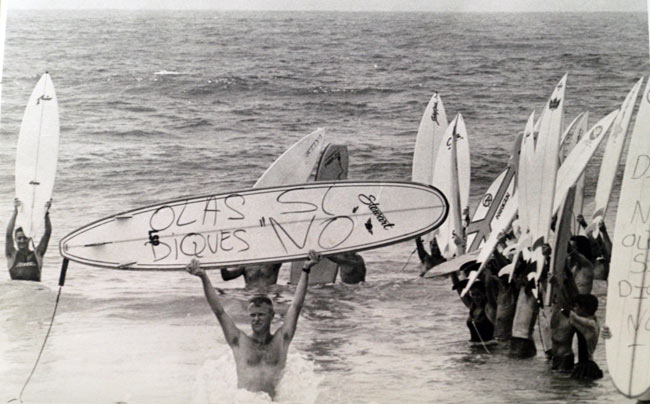 One of the most critical times for the beach, when its future was said to be doubtful, was after the Coasts General Office’s decision of building a semi-submerged dike on Cícer Beach, from los Muellitos to Punta Brava. It was the nineties, in the middle of the urbanistic development of the Cícer-Guanarteme area. Our politicians thought that with this dike, the waters striking Guanarteme beach would become calm, so it could be used more easily by the general public.

After the project became known, the people mobilized quickly, from intellectuals to surfers and associations of residents. Many voices were heard speaking out against this new senselessness devised by politicians and technicians from their offices in Madrid.

Many demonstrations were organized covering the whole beach. Surfers, for the first time in history, organized themselves to protect their beach and their waves. I still remember the late sculptor Tony Gallardo grabbing a loudspeaker and shouting encouragement to the citizens who were defending the beach against this insanity. The battle went on for many months and eventually the project was stopped that would have jeopardized the future of the entire Las Canteras Beach.

Since that year, in which those protests against the dikes were carried out, public opinion has played a very important role in what is done in our Confital Bay.

Although some battles have been lost – like the car park that was built at La Puntilla, famous for its rich seafood – work on the Cícer car park was stopped thanks to other protests. This is an ongoing problem as it has not been removed yet and it seems that the end of this nightmare is still far from over.

Nowadays, other senseless projects are in the pipeline for Las Canteras, such as the artificial beach with dikes in El Rincón or the extraction of sand. However these will come to no avail. After those victorious cries of «No dikes!», the residents of Las Palmas know what they have to do with their beloved Las Canteras and their Confital, and this will make it much harder for unnecessary and dangerous constructions to be carried out.