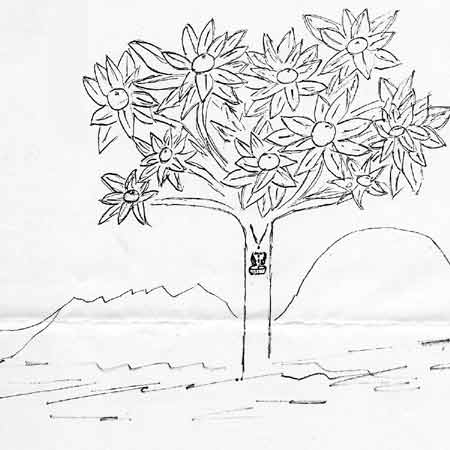 A certain time ago, but not all that long, as I was on a walk along the shore of our beloved Canteras beach, I came to the Alfredo Kraus Concert Hall, and took a seat on one of the long steps that face out to the ocean. There, I began to listen to the bubbling and hissing of the waves as they broke on the flat pebbly shore and ran back to the sea. This characteristic murmuring sound always reminds me of the breeze as it blows through the needles of pine trees. If you have ever heard it, you’ll know what I mean. If you haven’t, then I suggest you visit any of the pine forests in the Canary Islands on a slightly windy day and you’ll see what I mean.

Anyway, the story I wanted to tell starts as I was following the inland flight of a seagull, on a search for only he knew what, when I found myself looking at two smaller mountains a little further to the left towards “El Rincón”. We called one of them ‘El Morro’ (‘The Snout’) because it was round on the top. The other one was known as ‘Filo Cuchillo’ (‘The Knife Edge’) due to its sharp and elongated shape.

As I looked at them, I was transported back to my childhood and I could see myself with some friends (I am talking about 1946 more or less) scaling down the hillsides looking for sweet tabaiba cactus plants. Before you ask, I’ll tell you what we used to do with them: we would make cuts on the leaves and then leave them for a few days. When we returned, the sap (the milk, as we called it) had become a semi-dry, thick, rubbery liquid which was not repulsive or toxic and we took it as a very good replacement for chewing-gum.

We would also go up on to the hillsides of ‘La Cuesta de Chile’, the highest part of Guanarteme where the road leads up towards Tamaraceite, to do the same thing there. I remember we had to be careful not to confuse the sweet tabaiba plant with the Moroccan tabaiba, which is toxic and causes skin irritation. More than one of us ended up with our lips on fire! As we cut the tabaiba, we noticed something strange: the ones that grew in sunny spots would release the sap with a noise that sounded like a grateful gasp, as if relieved from the pressure caused by the sun’s heat. On the other hand, the ones that grew in shady spots were fine. It would be interesting to find out who gave it that name, sweet tabaiba, as its sap is rather bitter.

Anyway, these are the kinds of things that come to my mind every now and then, and I share them here. Maybe some of the readers of this story had similar experiences and my anecdote has brought them nostalgic memories.

Notes on the Euphorbia Balsamifera.

This species together with the wild tabaiba is typical of the low lying and dry areas of the Canary Islands. In contrast to other Euphorbias, the sap of the sweet tabaiba is not toxic and in the past it was usually chewed to absorb saliva and to strengthen your teeth. Once dry, the sweet tabaiba was used as chewing gum. It was also applied directly to cysts and verrucas in order to get rid of them.

On the 30th of April 1991, a law was passed declaring this natural plant an official symbol of the island of Lanzarote.

An Interview with Martín Chirino, a Universal Beachgoer

Martín, you grew up in Las Canteras and were a member of the most artistic gang on the beach. How do you...
Reportajes inglés

5:30 a.m Early every morning, Jacinto, Roman and Nicholas, together with their workmates, are the people in...
Reportajes inglés

The beach at low tide, undresses its reefs. And at dusk, frames the Teide in a spectacular way, for...