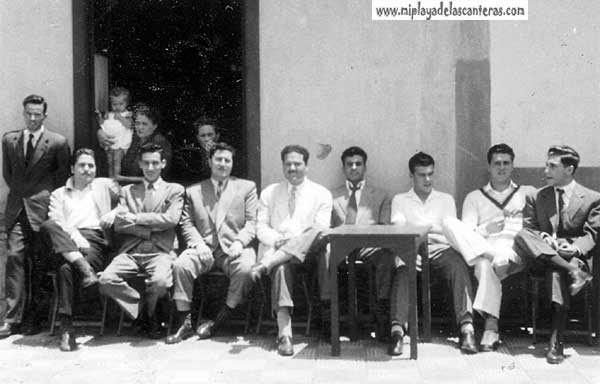 The P.A.L.A Club was a very special landmark in my youth. Summer and the beach season started for us at the end of June, on the day of San Juan.

I would leave my house in La Isleta and hurry to the seafront, eager for a swim just in front of the club. I would leave my bag in the club’s outbuildings and run down to the beach. I remember how kind Luís Báez was, allowing me to use the club, seeing as I wasn’t a member, although my uncles and aunts were.

I remember the musical evenings which were organised in the patio of the Club. Once, I was invited to sing with a group of participants one of whom was my music teacher, Rafael Gómez, who accompanied me on the piano. After that, the members of the Club voted for the best song. That time, I won the first prize by singing “Muñequita Linda”; the prize was a beautiful carved tea box which I still have.

Sometime in the 1950s, I can’t remember the exact year (I’m getting old!) the P.A.L.A Club organized dances to entertain young people with an orchestra that delighted the days of my youth. The teenagers who had been studying in the Spanish mainland came home for the summer and we met at these dances, excited to see each other again and exchange news and gossip. At those dances, romances bloomed and lasted as long as it took autumn to arrive. Like my granddaughters do today, the girls would meet the day before the ball to decide what dresses and make-up they were going to wear, and to agree on the meeting time (usually at around half past seven). Back then it wasn’t like today when teenagers go out at midnight and carry on till the next morning. Now they say, «There’s no point in going earlier, there’s no atmosphere», and there’s nothing parents or grandparents can do about it. You have to keep a cool head, even when you are burning with anger inside. If I had told my father I was going out at that time of night, he would have slapped my face!

I remember the P.A.L.A Club had a beautiful, wide dance floor. To the left, up a few steps there were tables and chairs where we, the girls, would sit in a group watching the scene. To the right you could see the orchestra; we always had live music. We were so lucky. Behind the dance floor, there was a curved staircase that led to the bar, where you could have a drink. That staircase was where “the ice-boxes” would stand.

The “ice-boxes” were the boys who held a glass in one hand and a cigarette in the other, and who didn’t dare to take anybody on to the dance floor, they just stood there staring, like statues. That’s why we called them “the ice-boxes”. I don’t know if they ever got to know about this nickname. It was impossible to count on them at all, either to talk, or to dance. They never left their spot, as if they were frozen. They only ever moved to go to the bar for another drink and then went back to the damn stairs! What kind of material were these boys made of, for goodness’ sake? Of course, they were made of ice. The nickname suited them perfectly.

In memory of Ulises Betancor. (Pictures: Ulises at the old entrance to Confital with his paipo. Ulises,...
Reportajes inglés

(Drawing: Vicente García R.) What self-respecting beachcomber has not caught an octopus, followed its...

Chano Ceballos: “I was born on the 29th of May, 1922 between two beaches - Arrecife and San Rafael”