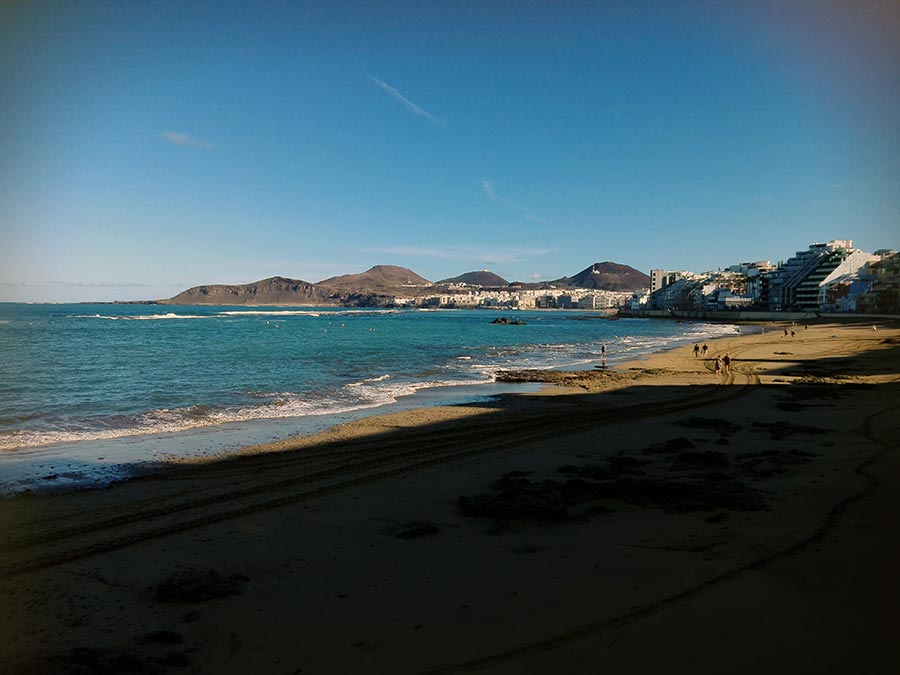 I am alone, sitting on the sandbar of Las Canteras and looking into the horizon. The rippling of the waves are putting me into a trance, leaving me incapable of thinking straight. The ocean is still, lethargic, as we, the local beach goers say. The water level slowly and gradually rises like the respiration of an ocean mammal that slowly appears, dispersing the surface water of the Bay only to once again leisurely submerge itself in the midst of glittering, bubbling surf.

The seat that I am sitting on; in my youth we used to call it the lift; after diving in, we used to wait for the wave and with a fishing net, half turned towards our bodies, we soon wouldn’t be sitting much longer. As I continue in thought old memories and experiences rush back to me from over a half century ago. From here in the company of some friends, who are today on some far off beach, I made a small trip to the most characteristic cliffs of this part of the beach…suddenly I hear familiar voices. I turn my head in both directions, but I don’t see anyone…“I must have water in my ears,” I say to myself. Once again I am absorbed by my own memories and I begin to hear the voices again.

It’s them! I quickly rise to my feet. The voices are fading in the distance. From what I could hear, they were planning to repeat that very same journey. I hastily decide to join them and begin to follow their voices, trying not to make any noise, so as not to frighten them. We arrive near the end of the sandbar on the side looking towards La Peña de la Vieja and one of them says: “Let’s swim across the Pasadizo up to the Lisos and do the same trip that we used to do before.” No sooner said than done! The doomed (I pray they are not) jump into the water without any hesitation. I nearly lose them. We arrive at the Lisos. I follow them, being careful not to slip. I tried to continue listening to them, as they were carrying on a lively conversation.

After a few strokes we arrive at the edge and walk across the Peña de la Galleta which is on the same side as the Peña de la Palangana (hollow cliff), which gets its name from the small cavity. Two more strides from there and we reach the Peña del Balcón. We peer out and see the nearby Peña del Camello with its characteristic hump.

We arrive in no time and like a mandatory ritual we sit upon the protrusion. We return to the ridge and admire the Gran Roca that always watches over Las Canteras. Our journey is now near its end with only one stage to go. We splash into the water and wait a moment at the Peña del Descanso (resting rock), which is also its purpose, and we continue on towards la Peña Peligro, half submerged.

From there, in one last trip, we arrive at the Peña de la Vieja. We climb up with ease and when I decide to talk to them, they say, “good bye”, and just before their voices fade away I can hear them say: “Until next year.”

Suddenly I feel myself getting lighter and see myself rolling around like a piece of drift wood. During the entire trip I hadn’t moved from where I was sitting. A large wave crashes down on me and tosses me onto the sandbar. I slowly begin to think clearly and stagger to my feet, but I don’t hear a conversation, only laughter. There is no one around me. I’m alone. Alone?

Ever since I was a little girl I liked to run on the sand. I made up games to play and my grandfather watched me attentively, deliberately and closely. Only when I was on the beach, and with him, did I feel free.

My grandfather was a quiet man, as I also tend to be, and maybe that’s why we understood one anther so well with so few words. His eyes possessed more wisdom than any school. When he got angry it was enough for him to raise his white eyebrows and open his eyes with vigour. And when everything was going well, he would smile with closed eyes, making him a dead match for the man who used to serve us spring rolls every Sunday.

There were times though, when my grandfather neither frowned nor smiled. On those days he would walk on the beach, taking me by the hand and would kiss me on the forehead. We would arrive at the beach and he would go into the water and swim and swim. I always tried to swim after him, but I would soon grow weary and have to settle with returning to the shallow waters to catch crabs. Whenever I looked up I could see my grandfather on the big rock, La Peña de la Vieja, seated with his back to me and to the rest of the world. He could stay there for hours. And with a little luck on some days I had enough time to fill my pail with a seahorse amongst my many crabs.

Soon enough the afternoon would give way to the evening and his profile would begin to blend into the horizon until he stood up and went back into the sea. Once he reached me he would meet me with a smile, grab my nose and sit down beside me on the sand. I could always think of a thousand stories to tell him…from the small snail that I unsuccessfully tried to remove from the rock, to the odyssey of trapping a seahorse, while the other children watched in anticipation of a hairy animal.

Often I asked my grandfather what he was doing for such a long time on the Peña de la Vieja. And just as often he would leave my questions unanswered. Up until my birthday that is: He kissed me on the forehead and walked along the beach holding my hand tightly. We jumped into the water and went swimming. I swam after him…and almost lost my breath, but something told me that I had to make it to the cliff with him.

And I did make it. Suddenly I saw how my grandfather stretched out his hand to me to help me up onto the cliff. We spent a long time looking into the horizon, watching the colours change and the seagulls circling above the boats.

Then my grandfather spoke: “On this cliff nothing can harm you; no one can do you any harm. Everything that you see, absolutely everything, is here to protect you. Every stone on this beach knows you, every grain of sand, every oscillating wave… You only have to come here and look, observe; give a piece of yourself to it; let the entire beach form part of your life, part of your emotions…it is here that you will find happiness”.

I was completely speechless; my grandfather had revealed to me his great secret, the reason for looking at the horizon for so many long hours. I can still remember it and every time that I do I get goose bumps just like I did on that day.

Many years have since passed and there are days in which I arrive, swim and meditate, feel, and share a part of me with the beach. I always feel happy when I return to the edge…I just miss having someone to grab my nose, someone to kiss me on the forehead and someone with whom to walk along the beach. But I have my beach and I know that my grandfather is there with me.